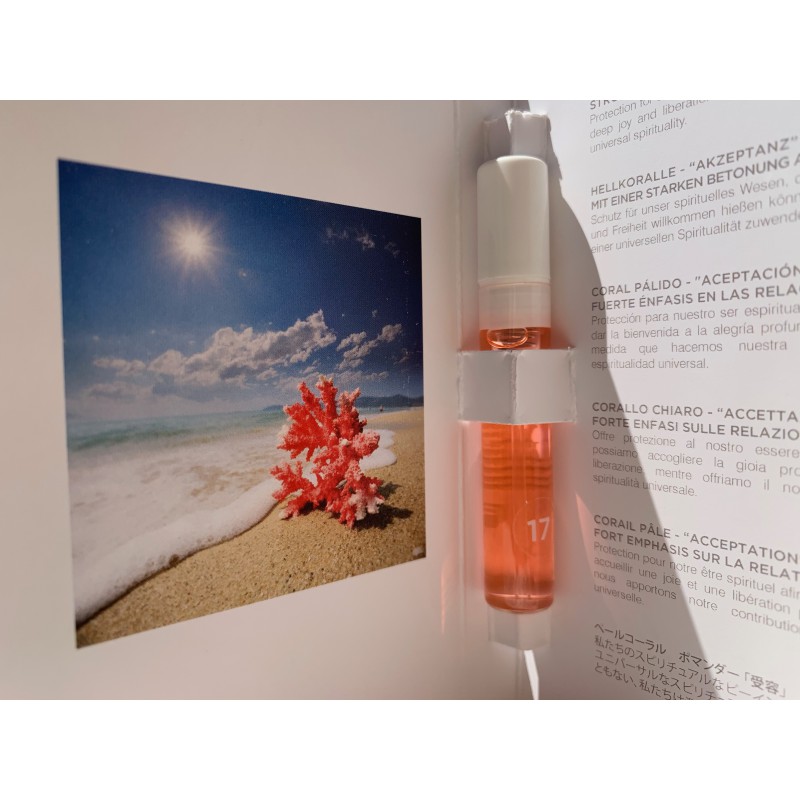 Eclipses have long been known to change the political order; in Babylon a commoner was appointed King prior to an eclipse. The August 21st, 2017 eclipse is associated with a particular family of eclipses identified by astrologers as the Saros series, number 145. This family of eclipses started in 1639 but didn’t produce a total eclipse until 1927, since then each one has been associated with breakthroughs in aeronautics, television and satellite communications. The time of eclipses can be used to symbolically clear and cleanse the stagnant areas of our lives.

Pale Coral Pomander helps us to love the parts of ourselves that we have given negative attention to, in order to be able to love ourselves a little more, to be more kind to ourselves. When we recognise the parts of ourselves that we haven’t loved so much and realise they are integral to our being we can recognise that when there has been a shift it is often a negative experience that we have learnt from. The eclipse can be utilised to powerfully refocus and turn shadows in to light. It provides an opportunity for us to recognise that when we act from fear, energy is released that leads to the creation of that very fear. It seems that to love our fears would be to integrate the energy that has been locked up in our fears, helping us to make the next step forward - the release of unrequited love, the release of fear. Eclipses are tools from the universe to get us to pay attention to areas in our lives that need to change. They shine a glaring ray of truth to the part of our lives that is being touched.

In Hansel, B093, new awareness (Pale Coral) which is a non-judgmental awareness in relation to the process of individuation (Turquoise) is interesting to consider, Turquoise is the complimentary opposite of Pale Coral. Following on from the radical realisations prompted from the eclipse, having faced what lies in the shadow that brings us what we do not want in life rather than what we do leads to progress on the journey of individuation and greater awareness or consciousness. Pale Coral/Turquoise gives us the opportunity to be able to feel for the sense of balance between the male and the female within. The male and the female allow us to connect with the collective ocean. Collective unconscious is aspects of ourselves which we all share; it is a resource in relation to all the symbolism and understanding of the collective. It does not matter which conditions we were born into (religious or social) collective consciousness taps into everything. The coral, giving access to that collective, of colour opposites, gives us the opportunity for something which is a revelation of understanding of the male and the female coming together within the self. This gives singularity of vision, a clear vision from a unification of the female intuitive and the male analytical within the self.

The Pale Coral Pomander can assist us in welcoming deep joy and liberation as we make our contribution to universal spirituality. As the coral is recognised as a deep awakening of the Christ energy it is significant that the Bethlehem star is visible on 23rd September.

At a mental level, Pale Coral is to do with community co-operation and the sense of an integrated whole. We can look at it from the point of view of being aware of what is happening with oneself whilst at the same time being able to extend that awareness to include what is happening universally.

Empathy relates to the Pale Coral, there is a resonance between two beings, facilitated by a common humanity and interdependence. Empathy is a shared situation. The more the light of consciousness comes to it, the greater the possibility of feeling their pain and the easier it is to relate to their pain. That sense of empathy means that their pain is your pain and maybe you can do something within yourself that makes a difference to their pain.

As coral grows it form as a mass, lots of little organisms come together to make a circle. That circle can grow and expand into an island because the little bit of water in the middle of the coral can become isolated from the ocean. We can say that coral has as an inherent part of its nature, even as an individual organism, something symbolic of the circle of life, the wholeness of life or the co-operative whole. No separation just a sense of developing the mental continuum of wholeness, the collective.

When the reef begins to die, whether that is due to a change of currents or other effects in the ocean related to what coral feeds on and how they reproduce, it always happens from the outside in rather than the inside out. The coral on the outside is definitely affected before the ones deeper inside the reef are affected. That seems to be the way the reef operates. As an organism, coral is very sensitive to its environment and is used by ecological groups to monitor pollution. The Pale Coral pomander can be used when we’re feeling very sensitive in an environment, to support our ability to cope with this. This sensitivity may be felt as waves of emotion spontaneously arising from an unknown source.